Glaucoma is an eye disease where the pressure increases inside the eye, because the fluid produced inside the eye cannot escape. This pressure causes pain and blindness. Glaucoma also occurs in humans and other animals but it is generally worse in dogs. It is one of the most common causes of blindness in dogs.

In the normal eye, the chamber in front of the iris and lens is filled with a fluid called the aqueous humour. The chamber behind the iris and lens is filled with a gel called the vitreous humour. Both the fluid and the gel are transparent so they allow light to reach the retina and thus allow vision. The aqueous humour is constantly produced by the ciliary body, which sits behind the iris, and it provides nutrients and oxygen for the inside of the eye. It flows through the eye until it leaves through the drainage angle between the iris and the cornea (iridocorneal angle). The ciliary body acts as a “tap” and the drainage angle like the “plughole”.

In glaucoma the ‘plughole’ gets blocked but the ‘tap’ keeps running. The aqueous humour can’t get out so the eye fills and the pressure on the cornea at the front of the eye causes it to turn blue in colour. The pressure is incredibly painful, and is described as a severe migraine headache. Within the eye, the pressure damages the retina and the nerves taking the signals to the brain to allow vision. This results in blindness, which can become permanent in a very short time if emergency treatment is not started.

Why does it happen?

There are numerous causes of glaucoma, and as the inside of the eye is very precisely arranged, many eye diseases can obstruct the drainage route and cause glaucoma secondary to the original disease.

The fluid drainage route to and through the plughole can be blocked by:

Some individuals in certain breeds such as the Basset Hounds, Great Danes, Samoyeds, Siberian Huskies, English/American Cocker Spaniels, English/Welsh Springer Spaniels, Golden/Labrador Retrievers and Welsh Terriers can be born with deformed drainage angles which decrease drainage and even completely block it. These animals are said to have primary glaucoma. Some animals with abnormal drainage angles develop glaucoma earlier in life, some do not show any signs of the disease for years.

What are the symptoms?

The normal pressure inside the eye is between 15 and 25 millimeters of mercury (mmHg). If the pressure is only slightly raised then the white of the eye may just look a little red. This is very easy to miss and is easily confused with less severe ocular diseases like conjunctivitis. Sometimes the pressure spikes and then reduces, and so the eye seems to get better. In these cases, it appears as if the eye has responded to conjunctivitis treatment, but in fact the pressure has only temporarily subsided. Eventually the plughole becomes completely blocked again and the pressure rises.

When the pressure in the eye gets higher, the ‘headache- like’ pain starts. Owners often miss this pain because dogs rarely cry or rub their eye. This makes them depressed, they tend to want to sleep more and are less inclined to play. As the pressure rises, the cornea at the front of the eye develops a blue colour, as the pressure stops the normal fluid removal from the cornea. Soon after this, the eye becomes blind-this can happen within hours. If the pressure keeps rising then eventually the eye enlarges. Unfortunately, it is very easy to diagnose glaucoma at this late stage but the damage inside the eye and the blindness is often permanent.

How do we diagnose it?

The signs and symptoms discussed above are suggestive, but accurate diagnosis requires a machine to measure the pressure within the eye. This machine is called a tonometer. Your vet may have a tonometer, but if they don’t they will refer you to an ophthalmology clinic to have this technique performed. The tonometer fires a small plastic ball-ended pin at the eye surface and measures the speed that it rebounds. A small computer then calculates the pressure inside the eye from the measurements obtained.

What is the treatment?

Glaucoma is an emergency. It requires urgent treatment to reduce the high pressure or the eye quickly becomes permanently blind. Glaucoma almost always requires lifelong treatment, as the disease can only be controlled rather than cured. Initially, medical treatment is used, with the application of eye drops to reduce the intraocular pressure.

What if the eye drops can’t control the pressure?

If medical treatment fails to control the pressure, then a variety of surgical procedures can be used. We can perform a technique to temporarily drain fluid from the eye and therefore reduce the pressure. A surgical shunt can be placed to bypass the blocked drainage, acting as a “bypass”. A laser can be used inside the eye to “turn off the tap” by targeting half to three quarters of the ciliary body, to reduce aqueous fluid formation. This is called endoscopic cyclophotocoagulation (ECP). The effects of such surgeries can be good, but lifelong medication is also required and further surgeries may be necessary. In the long term it is sometimes necessary to remove the eye if it becomes permanently blind and none of the treatments control the pain. Most dogs cope exceptionally well with one eye and are generally much happier when the source of the pain is removed. 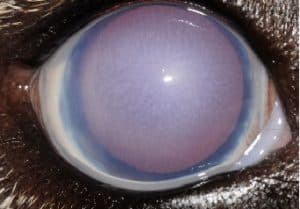