The cornea is the clear ‘windscreen’ which allows light to enter the eye. It is very strong despite being less than 1mm thick, but can be very susceptible to damage. It is composed of three layers: the outer epithelium, the stroma and the inner endothelium. If the outer protective layer becomes damaged, the resulting hole in the epithelium is called an ulcer.

immediately beneath the epithelium, at the front of the stromal layer are
the endings of the Trigeminal nerve, which senses pain. Any damage to the cornea increases stimulation of these nerve endings, resulting in significant ocular pain. Animals show ocular pain much as we do when we get something in our eyes: as increased blinking, blepharospasm (screwing your eyelids shut) and lacrimation (increased tear production).

Damage to the cornea can result from many causes, including a scratch from a cat, a grass seed or other foreign body trapped under the eyelids, a scratch from a bush, dry eye, eyelids which roll inwards and rub the eye (entropion) or extra eyelashes growing in the wrong place

How is an ulcer diagnosed?

We know when an ulcer is present because the eye is red and sore. But to confirm the diagnosis, we use an orange dye called fluorescein, which when put in the eye sticks to the stroma (the layer underneath the epithelium) staining it green. Your vet can do this test for an ulcer or use it to see if it is healing.

Are there different types of ulcer?

Ulcers can be simple or complicated. We also class them according to their depth, as superficial or deep (anterior, mid or deep stromal). If they are really deep, down to the last corneal layer (the endothelium), then we call them descemetocoeles.

These are also called indolent ulcers, and are commonly seen in older dogs. The most commonly affected breeds are Boxers, Corgis, Border Collies and Samoyeds. These are superficial ulcers which fail to heal because although the epithelium grows across the stroma, it fails to adhere to it.

Although they tend not to increase in depth, they often are wider than they appear, and can take weeks, if not months to heal. With a simple ulcer, the epithelium should heal completely within a week. In these ulcers, the epithelium regrows but does not stick down. This means that surgical removal of the non- adherent epithelium is required to allow healing to
occur.

While superficial, uncomplicated ulcers can heal within a week on antibiotic eye drops and lubrication, some ulcers can become deeper. This is of concern because it means that the underlying cause is still present and making the ulcer worse. It can be because infection is present, with release of enzymes that can cause corneal melting. Surprisingly, deep ulcers often become less painful, as the nerve endings are near the corneal surface, and a deep ulcer has moved beyond them.

The cornea often looks clearer as the ulcer becomes deeper, as it is becoming thinner so these eyes can look “better” when they are actually getting dangerously close to rupture. Deep ulcers which are more than 50% of the depth of the cornea often require surgery to provide structural support to the defect and to promote healing with a healthy blood supply.

The innermost layer of the cornea is a very, very thin layer called the Descemet’s membrane (or corneal endothelium). If the ulcer reaches this depth, then the eye is at imminent risk of perforation. This is an emergency and will
require emergency surgery to repair the defect and provide support during healing. There are different techniques, all of which require the use of an
operating microscope and microsurgical equipment. We perform conjunctival grafts, corneo-conjunctival grafts and corneal grafts to repair these lesions. These are specialist and delicate surgeries which require intense post-operative care in the form of frequent drops to promote healing and prevent infection to the surgical site.

In cats, there is a virus (FHV-1) which can damage the cornea and cause ulcers. These often have a characteristic pattern and are called dendritic ulcers. This virus can also cause an unusual black ‘scab’ in the cornea, called a corneal sequestrum. This tends to be quite painful for the cat, and usually requires surgical removal and sometimes a graft. They can be treated with topical medication only but can take months to resolve, and there is a risk that instead of moving to the surface of the cornea and sloughing off, they can move deeper into the cornea, and even rupture it. 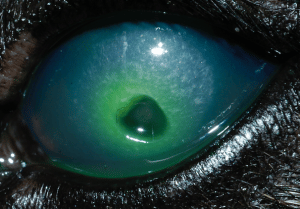