This a condition of the eyelids when instead of lying flat against the eye surface, the edge of the lid rolls over so the hairs of the skin make contact with the eye surface. It is more common for the lower lid to be affected and it occurs in many breeds of dog, for example Bulldog, Shar Pei, Pug, Old English Sheep Dog, English Springer Spaniel, Cavalier King Charles Spaniel) and less commonly in cats.

What are the symptoms of entropion?

Entropion can affect one or both eyes. Symptoms include:

Entropion is often accompanied with conjunctivitis but in some cases the entropion is not even obvious because it only occurs intermittently. If there is constant contact of the hairs with the cornea then ulceration can occur and long term changes can cause vision loss such as pigmentation.

How do you treat entropion?

In puppies, sometimes temporary tacking sutures are used to correct the problem and with growth, sometimes no further procedures are necessary. In more mature dogs, surgical procedures are often needed. The type of surgery is variable depending on the type of entropion, the conformation of the lids and around the eye and if any other aspects need correcting. A commonly used surgery is to remove a narrow strip of skin from along the affected lid margin to “unroll” it before using dissolving sutures to complete the surgical correctment.

If my pet has entropion, does he/she have to have surgery?

This is an outward turning, gaping or eversion of an eyelid and almost always affects the lower lids. It is common in older dogs and in breeds such as Cocker Spaniels, Bloodhounds and Bernese mountain dogs. It can also occur after trauma, scarring and entropion surgery.

What are the symptoms of ectropion?

Entropion can affect one or both eyes. Symptoms include:

How do you treat ectropion?

Ectropion needs surgical correction less commonly than entropion. Sometimes the condition can be managed with eye lubrication but surgery can be beneficial if ectropion is causing problems. Surgical procedures are again variable depending on the eye conformation but a commonly used procedure that helps is lid shortening, where the drooping lower eyelid skin is removed. In large breed dogs with excessive facial skin, for example blood hounds, full facial reconstruction to remove the excess skin is often required.

Post operative care after any type of eyelid surgery

After surgery of the eyelids, it is recommended that a plastic buster collar is fitted to prevent the patient rubbing the eyes. Your pet will go home with a combination of antibiotic drops and tablets along with pain relief and anti-inflammatories.

In many dogs that require eyelid surgery, multiple surgical procedures are needed for optimal correction of the eyelids. In may cases it helps if the results of the initial procedure can be assessed after full healing before considering if another procedure is necessary. 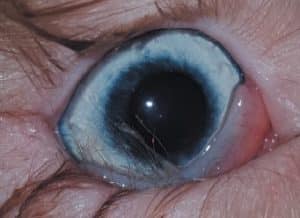