No looking back for Dougal the Goose 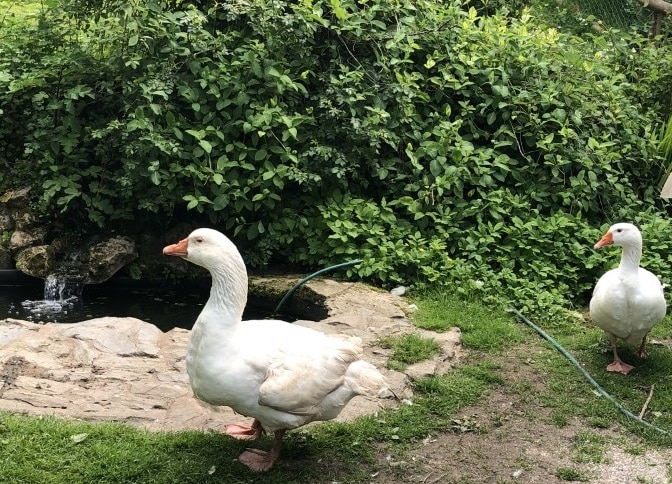 Dougal, who was injured in a fox attack when he was young, had recently developed serious eye problems, including a corneal ulcer and cataracts.

His owners Dianne and Mark Rimmer, who live near to Llanferres in Denbighshire, feared he would lose his worst-affected eye and have a very poor quality of life.

Dianne said: “Dougal is pretty much back to normal again, so we’re incredibly grateful to the amazing team at Eye Vet for their brilliant work.

“I must admit we were really sad when we were first told the extent of Dougal’s problems and we were worried he might lose his eye completely.

“He’s already been through a lot in his life. His whole family was killed in a fox attack when he was young and, while Dougal was the sole survivor, he still suffered injuries which have left him with arthritis in a wing, a leg and a disfigured beak.

“We didn’t want him to suffer any more or go through any more pain, so we wondered if it would be kinder to put him to sleep.

“However, Iona said she thought she could save the eye and help Dougal regain some of his sight, so we decided that he definitely deserved to have that chance.”

Iona explained: “Dougal must have been in incredible pain and there was a very real risk he could lose his eye.

“That was the last resort, though, and I wanted to give him every chance to avoid that outcome.

“We opted to put him on a course of antibiotics and I temporarily sutured his eye closed to protect it and allow the treatment time to work.”

Dougal was sent home for two weeks in the hope his eye would heal but Dianne revealed he struggled to cope and became worryingly withdrawn and inactive.

She added: “It was upsetting to see him like that as he barely moved, he just sat there facing the wall most of the time and had absolutely no quality of life.

“He has a ‘lady friend’ called Olive and she couldn’t understand what was happening either. It was very unsettling.

“We decided then that, if the antibiotics hadn’t worked, then having his eye removed was not an option for him or for us, we couldn’t let him suffer like that.

“Two weeks later, we returned to Eye Vet for him to have the sutures removed from his eye and I must admit we weren’t very hopeful.

“It was amazing, though. Once he was back in his garden he was different straight away and could clearly see a bit better.

“He improved quickly, too, and every day he wandered a bit further afield and within a couple of weeks he was pretty much back to normal and he’s not looked back since.”

Iona is also delighted with the outcome, saying: “Dougal was such a lovely patient, but it was difficult to determine the extent of his problems, as his third eyelid was covering the eye and he did not want to move it for us to see his eye properly.

“We had to give Dougal a general anaesthetic to move the third eyelid aside for a full examination and I just felt sure we could do something to save the eye.

“Naturally, we’re thrilled it has worked so well and Dougal is back to normal. He’s off the antibiotics and just needs eye drops now, so it’s a really pleasing result for us and especially for Dougal.”

Protect your pet from the sun

Penguin given the gift of sight